In the historic hotel on the Amalfi coast, Antonio and Carla Sersale have started a contemporary art collection curated by Silka Rittson-Thomas

In 1951 four Neapolitan sieblings, Aldo, Paolo, Franco and Anna Sersale inherited a summer house in Positano and decided to turn it into a hotel. In these post-war years the Amalfi coast became a world-famous holiday resort. From a fishing village Positano became an exclusive destination, especially loved by the Americans. The writer John Steinbeck visited in 1953 and wrote about it in Harper's Bazaar. He stayed at the Sirenuse, which he described as “an old manor house transformed into a first-class hotel, spotless and cool, with grape arbors over its outside dining rooms. Every room has its little balcony and looks out over the blue sea to the islands of the sirens from which those ladies sang so sweetly.” 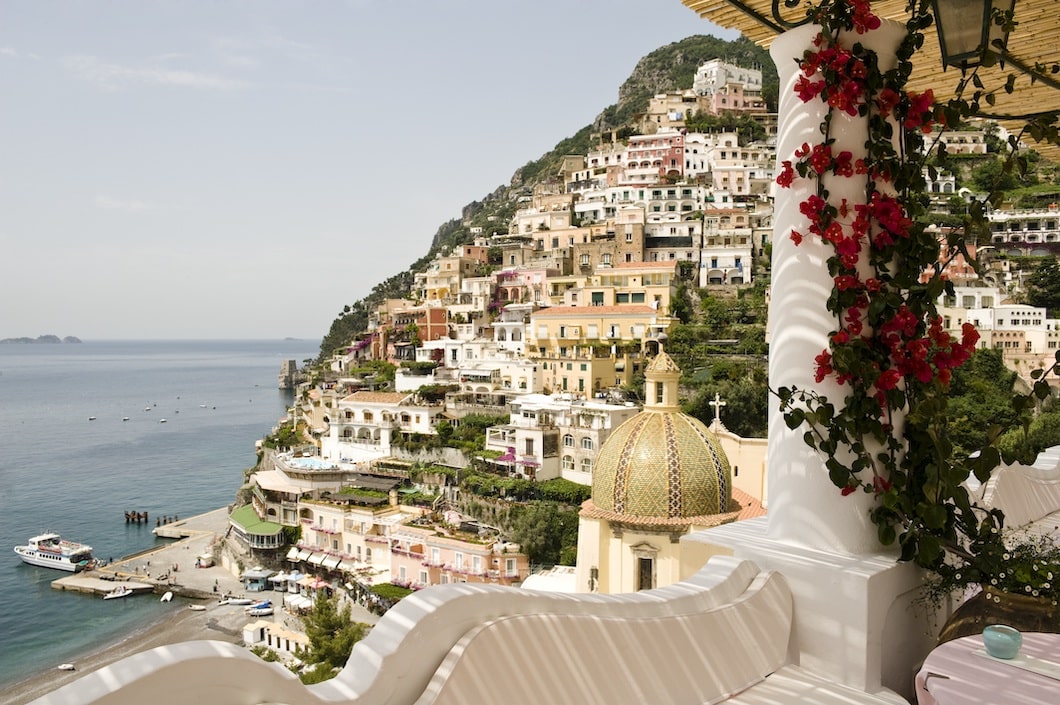 In the historic hotel, which became a luxury hotel already in the 1970s, the heirs of the founders continue the family tradition, renewing it with an innovative spirit. The contemporary art collection begun in 2015 by Antonio Sersale and his wife Carla is part of this renewal. The works of art, all site-specific, have a dialogue with the collection of furnishings and antiques that were purchased from auction houses in Rome and London by the members of the family over the decades. Contemporary art fits into these environments, removing the dusty aspect and imparting a dynamic thrust, a note of joy.

But art at the Sirenuse is not simply decoration. Antonio and Carla Sersale have a serious vision for the importance of the collection, so from the beginning they have relied on the curator Silka Thomas-Rittson, who assists them with their choices. "When we became passionate about contemporary art, we were newbies" says Carla Sersale, "we realized we needed a guide and Silka Thomas-Rittson helped us to create a coherent collection in few years." 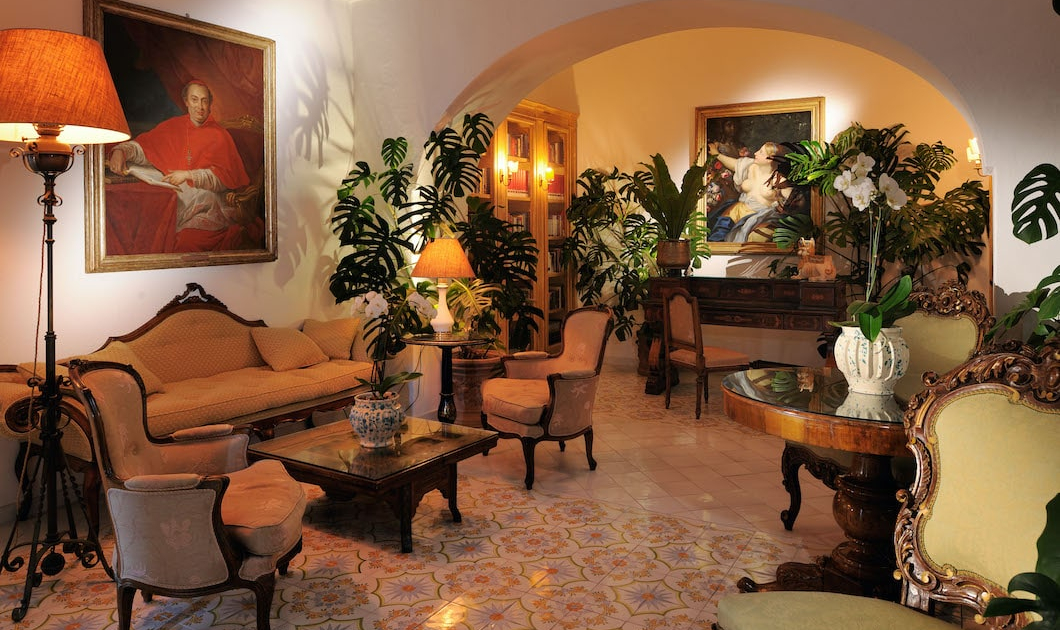 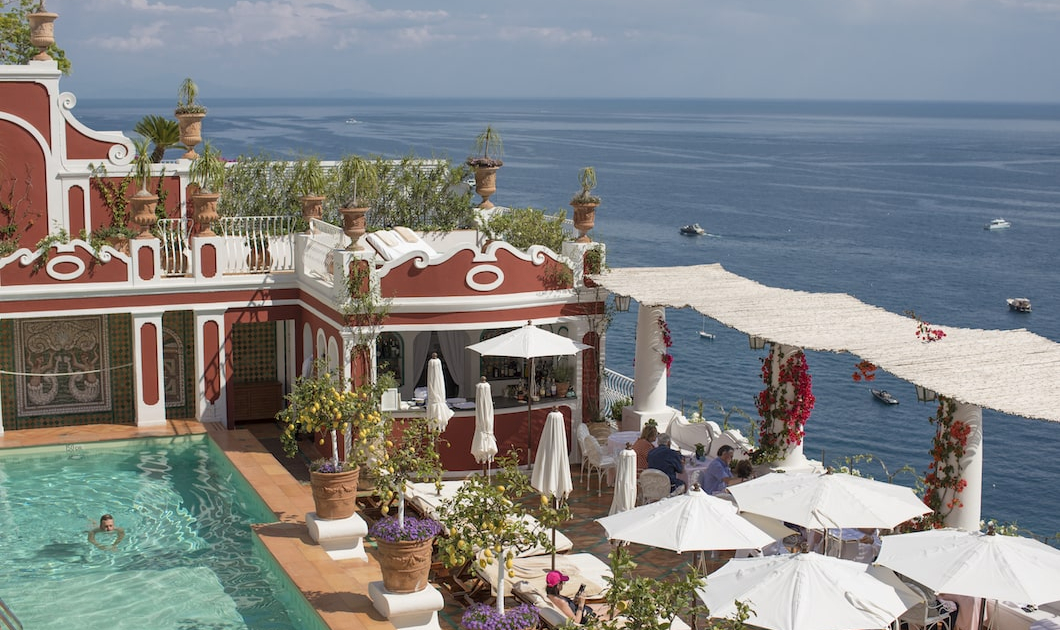 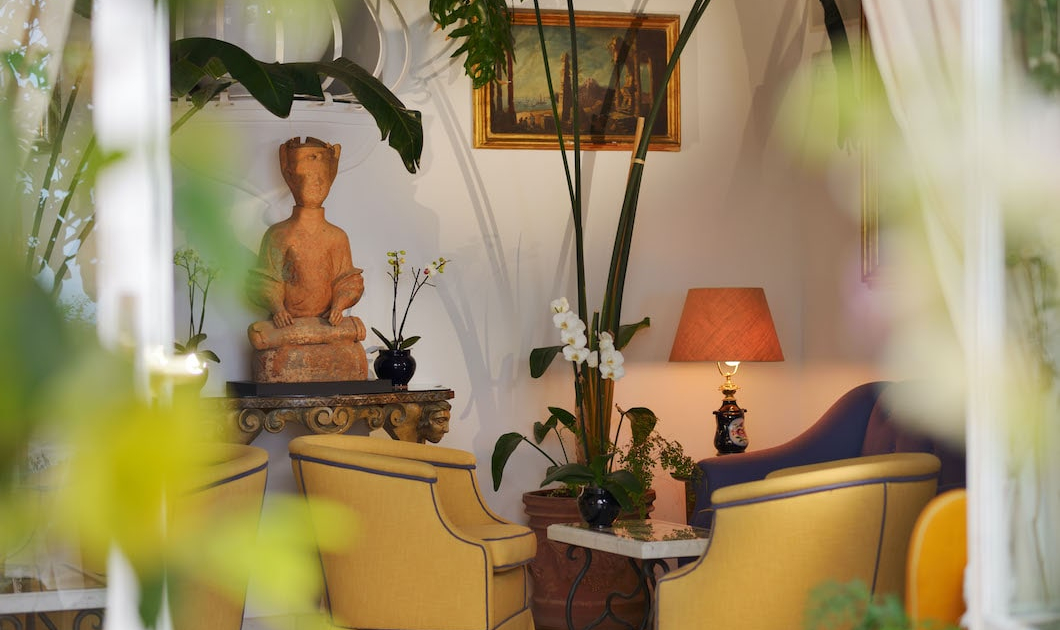 The collection of Antonio and Carla Sersale at the Sirenuse, curated by Silka Thomas-Rittson, began in 2015 with the neon "Don't Worry" by the British artist Martin Creed, installed on the ceiling of the hotel bar. The work is part of a series that began in 2000 when the sentence first appeared in red letters on the walls of a room at Chelsea & Westminster Hospital. It is a phrase that has a dual effect of reassuring and making people uncomfortable, that the artist has repeated in various iterations, which are now in important collections such as those of the Tate Modern and the National Gallery. In fact, when asked not to worry, the observers ask themselves what would be the reason to worry. In the version at the Sirenuse, the ambiguity of the message is underlined by the double nature of the work, formed by two superimposed neons to form a three-dimensional effect, a choice that the artist made for the first time for this occasion 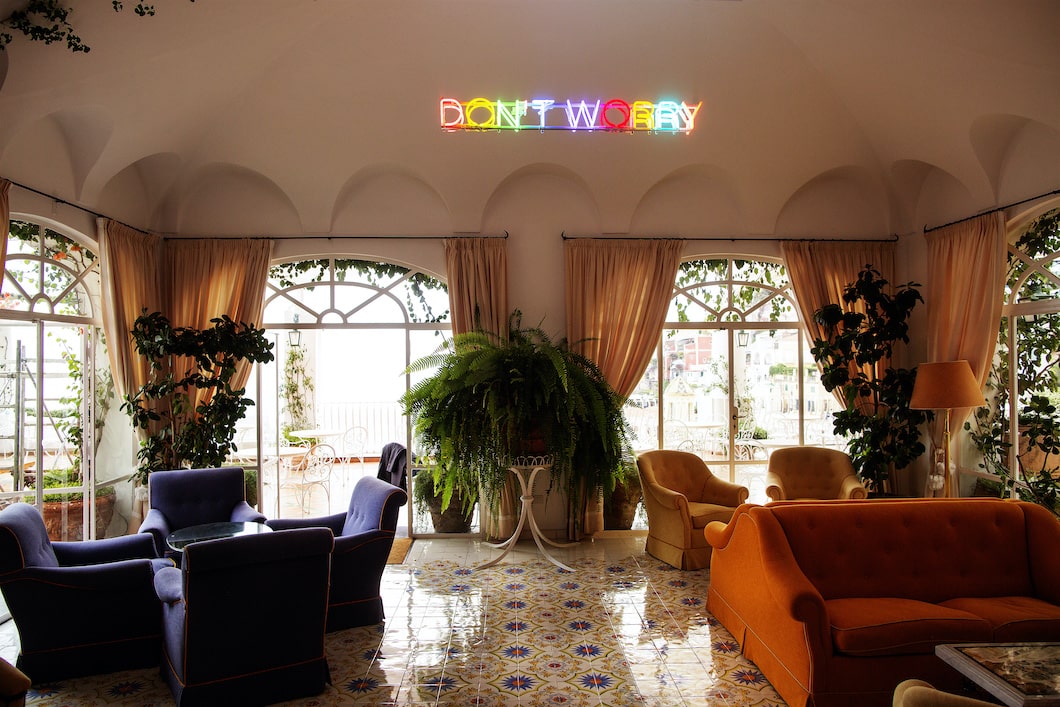 Each work proposed for the collection is made by the artist specifically for Le Sirenuse. "We choose the artist with Silka Thomas-Rittson " says Carla Sersale, "then we invite them to Positano. We spend time together, we eat together and, thus, a friendship is born. Usually, towards the end of the stay, the artist offers us a work, which is evaluated and then purchased, installed and exhibited."

In the same year of the installation of the neon by Martin Creed, Franco's Bar at Le Sirenuse (named after Antonio Sersale’s father, a man of great taste and attention to detail) was opened. In the center of the bar, the Roman sculptor Giuseppe Ducrot created a spectacular fountain made of yellow clay. In conceiving the work, the sculptor, famous for his neo-baroque style, aimed to create something bolder than the classic mermaid piece, something that was edgier. Inspired by seventeenth-century fountains, he modeled clay and glazed it a bright color to create something more abstract and disorienting, "a sort of freehand sketch in sculptural form". 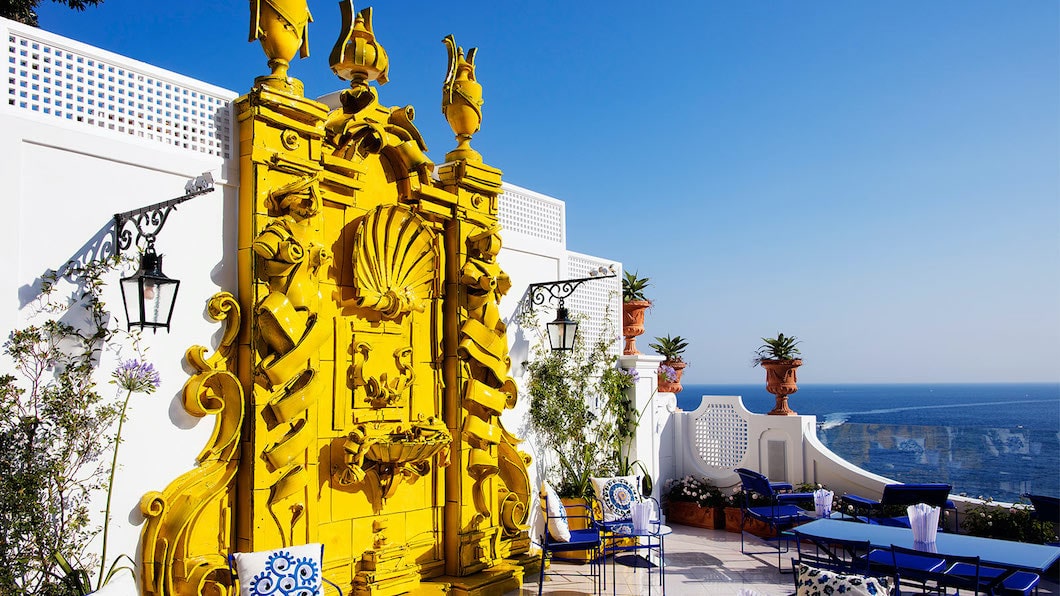 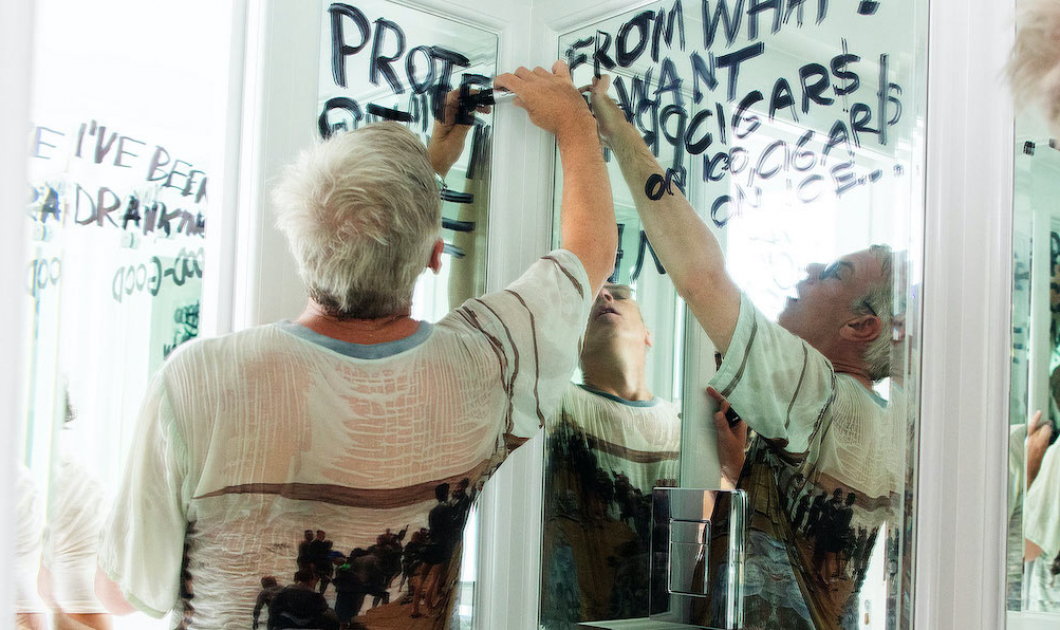 Karl Holmqvist during the realization of his work at Franco's Bar 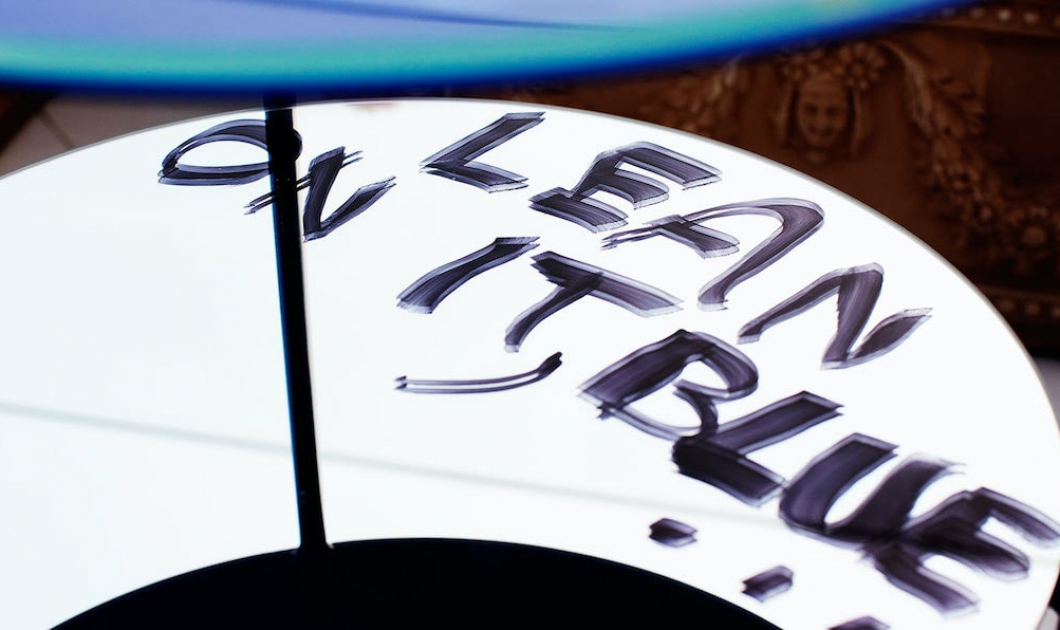 Karl Holmqvist's work under a table at Franco's Bar 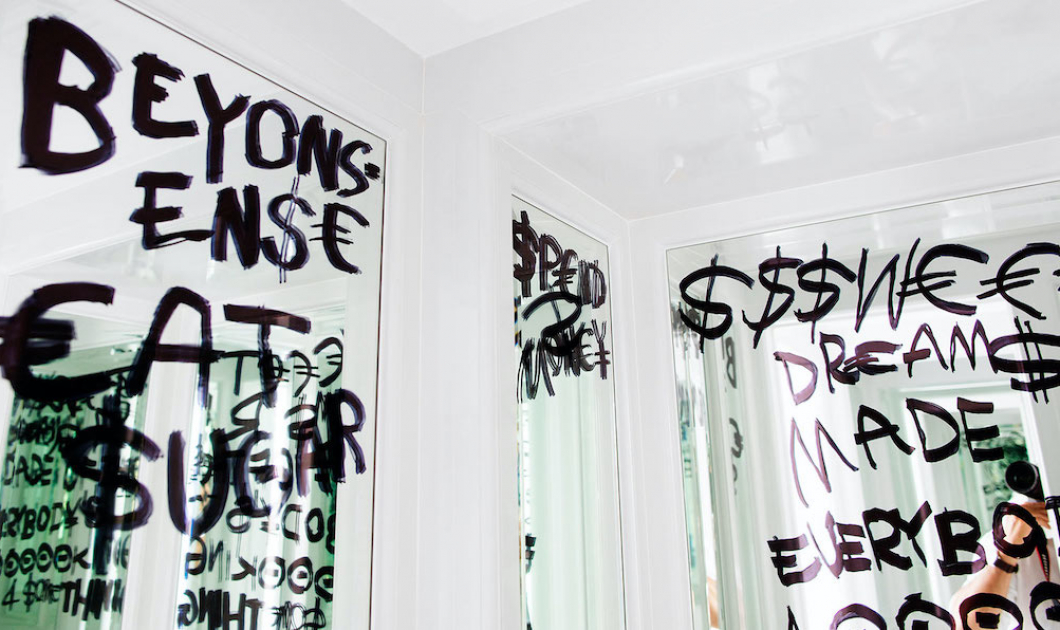 The work of Karl Holmqvist in the bathroom of Franco's Bar

Also for Franco's Bar, the Swedish, New York based artist Karl Holmqvist, known for his works based on text, was invited to create a work. On the mirrors in the bathrooms and under nearby tables, which are also reflective, the artist scribbled graffiti poems inspired by the lyrics of songs by Jay-Z, The Eurythmics and Beyoncé with a black marker, recalling contemporary pop culture.

For the curved counter of the bar, Orsina Sforza, a Milanese artist based in Rome, has created two of the lamps which she is known for, from the "Marie Antoinette" series, made with paper cups stapled together. Intriguing even by day, at night they take on a magical aspect, lit from the inside, they look like illuminated marine organisms. 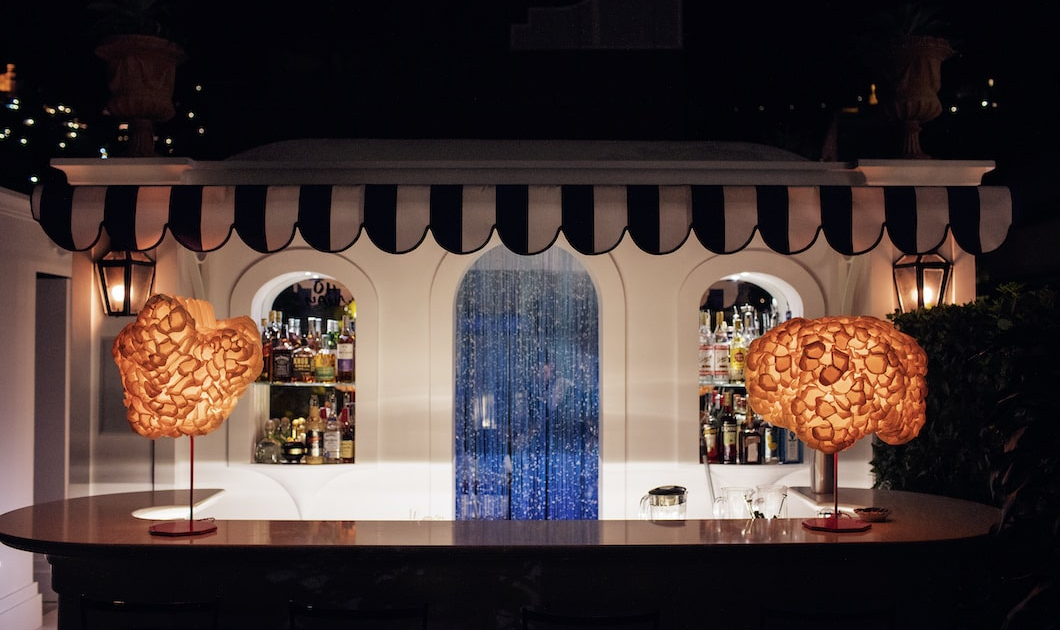 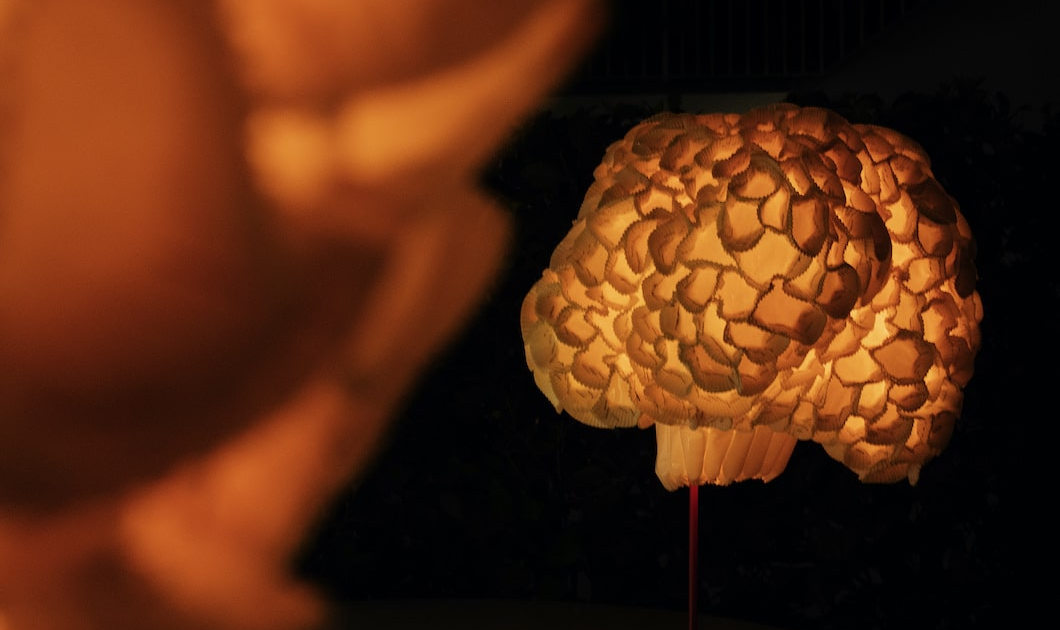 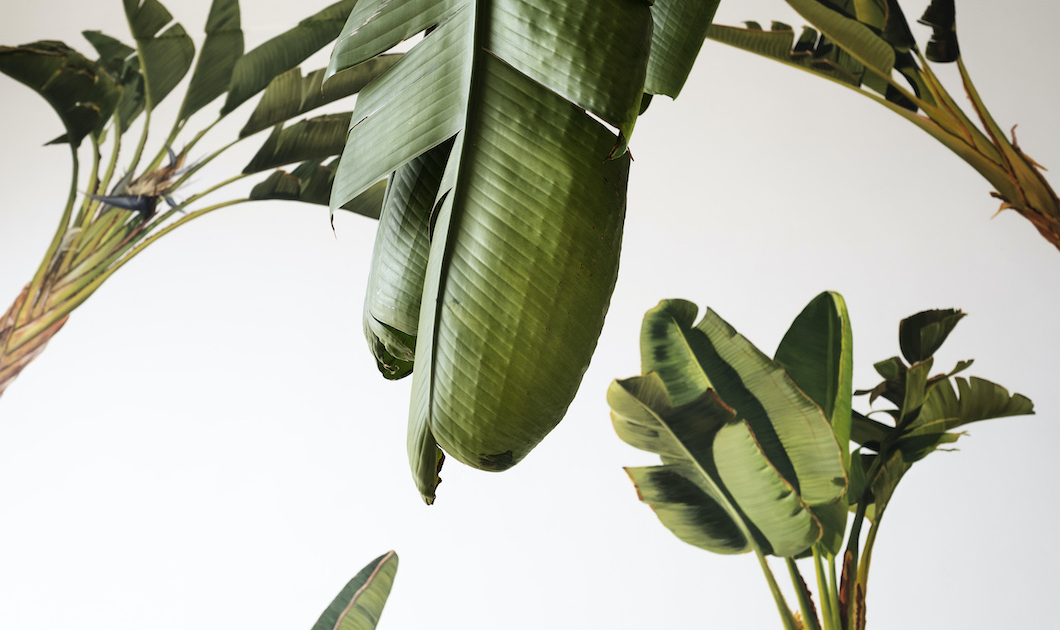 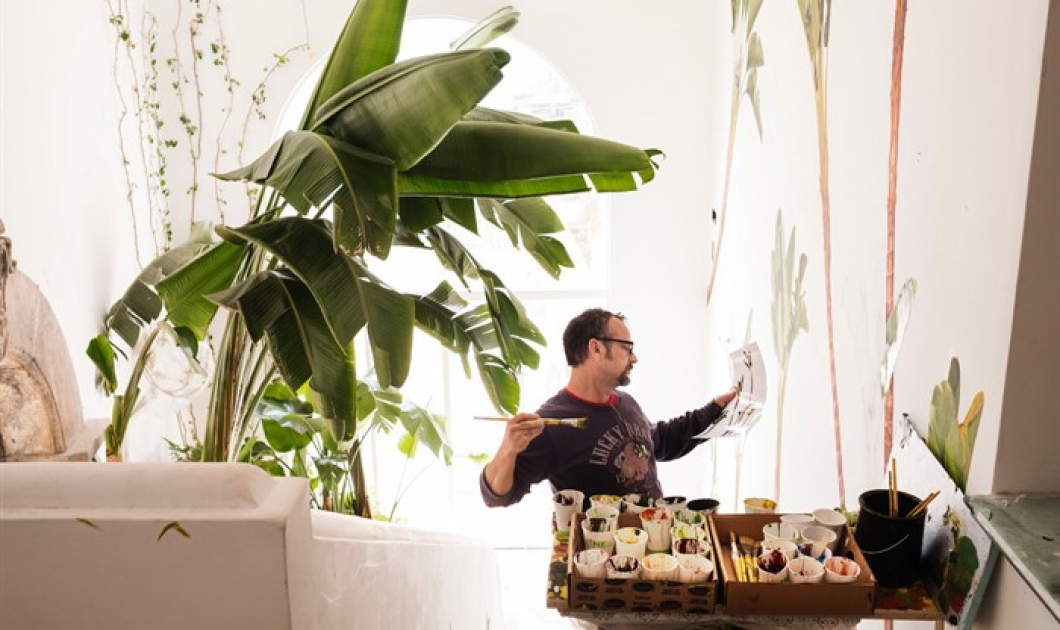 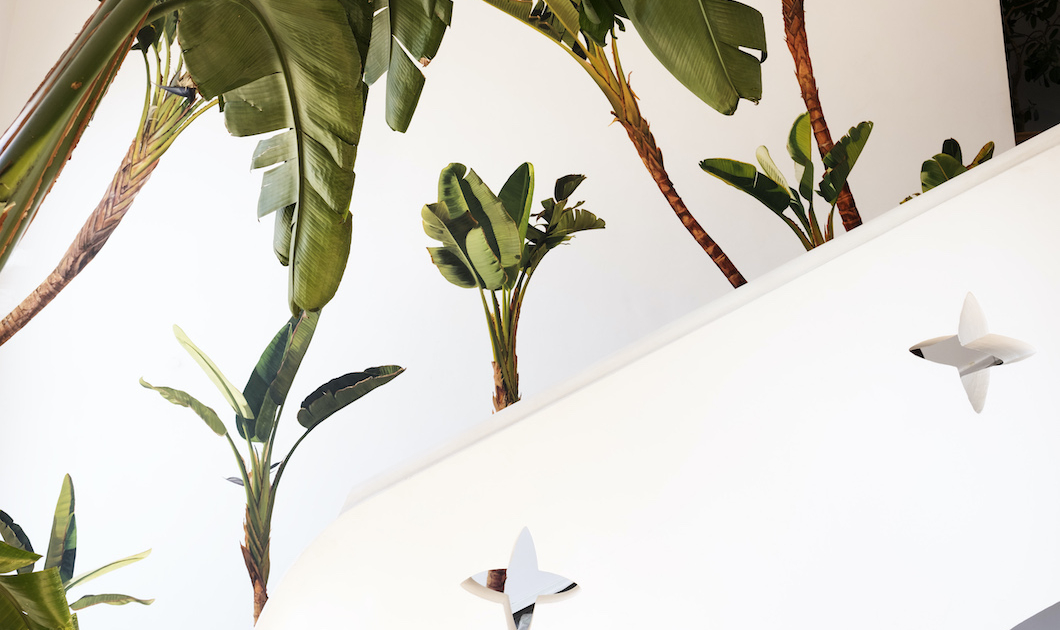 In 2016 the American painter Stanley Whitney was commissioned. His abstract painting The Jitterbug Waltz dominates one of the four lounges that formed the original nucleus of the Neapolitan brothers' house. Two smaller brightly colored paintings complete the setting in the white environment. The artist, who turned 70 in the same year of the installation at the Sirenuse, was rediscovered in the United States only recently, while in Europe, where he lived and taught for a long time (he still has a studio in Parma), his work was appreciated first. In 2015 the Studio Museum of Harlem in New York dedicated an important retrospective to him, and in 2017 he was included in the 14th Documenta in Kassel. His works are characterized by blocks of color divided by horizontal lines. The result is a dance of colors that seems to respect the rules and at the same time transgress them. His works have often been compared to jazz music, as his paintings have a tension between rules and creativity, between order and disorder. For the Black artist, the arrangement of colors on the canvas is also a political act: the affirmation that color is freedom and one color cannot dominate another

In 2017, the American artist Alex Israel was invited, and he quickly realized the subject of his site-specific work for the hotel in the Strelitzia at the entrance to the Champagne & Oyster Bar at Le Sirenuse. On the staircase of the bar the artist has created a hyper-realist mural that reproduces the leaves of the plants in the jars at the bottom of the staircase. The Los Angeles based artist uses the trompe l'oeil technique that was used by Hollywood film studios - part of a world that pursues realism in fiction and transforms superficiality into substance. By reproducing the Strelitzia of the Sirenuse - the city plant of Los Angeles - the artist refers to the Hollywood dream machine and the eternal aspiration of art to represent nature. But there is also another interpretation of the work, which goes back to the early years of Israel's artistic production. Since 2009, the artist has collaborated with Andrew Pike, one of the last stage painters employed full time by production studios before they increasingly turned to digital techniques. With him he created his famous "Flats" paintings with Los Angeles sunsets and the mural of Positano. To what extent, then, is the artist the author of the work? Or is the performer the author? A question that remains current from Ghirlandaio to Warhol. 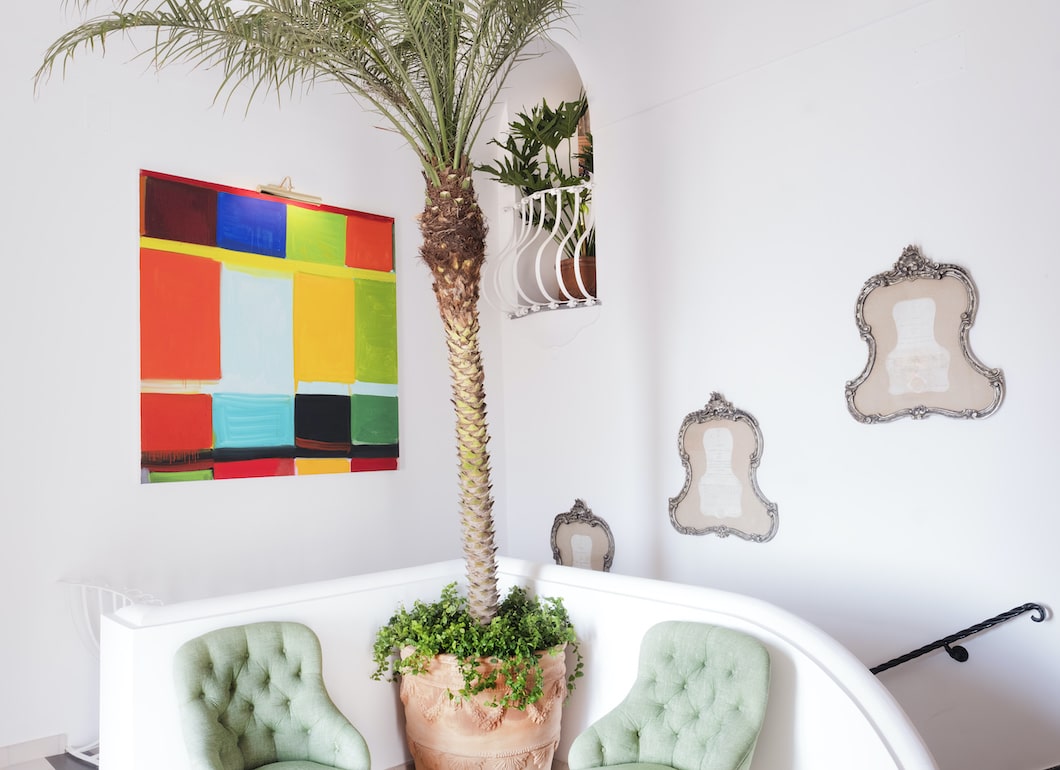 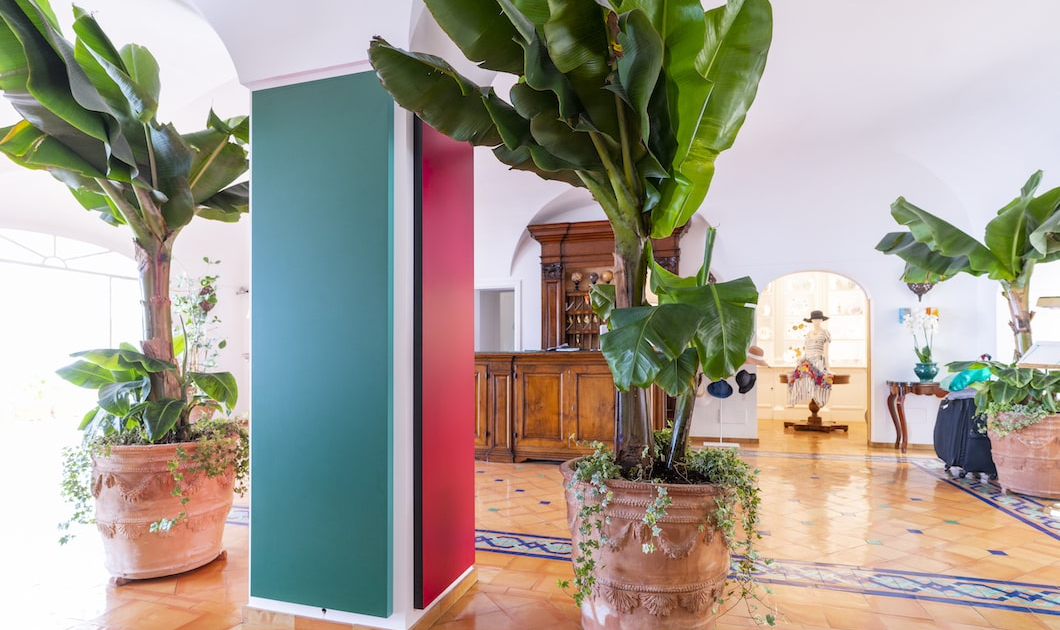 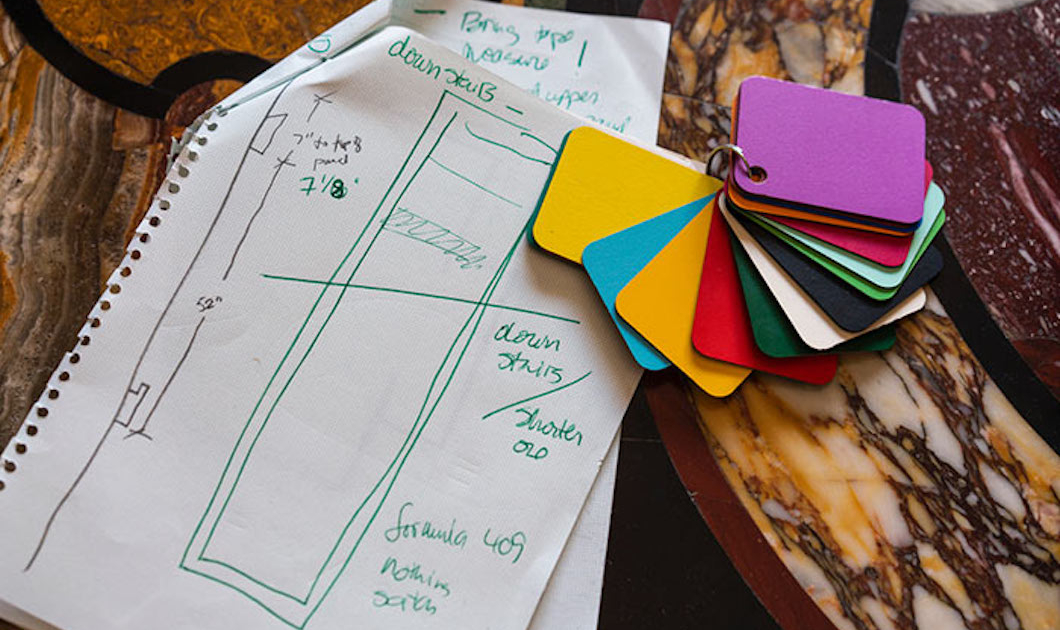 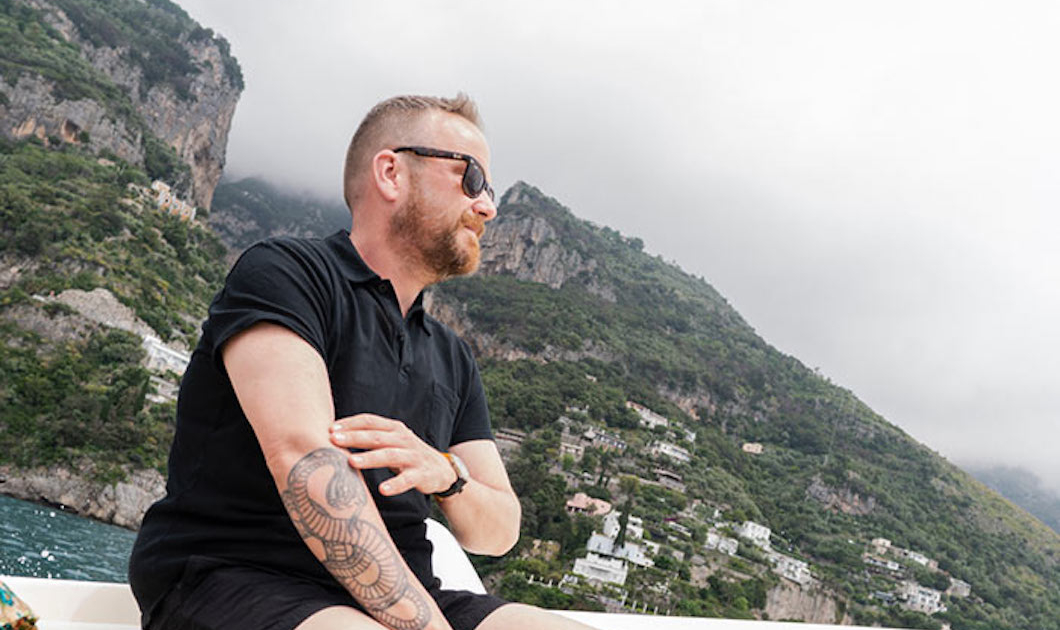 In 2018 the Chicago-born artist Matt Connors created "Continuous Color Circuit (Columns), for Positano" at the Sirenuse, a work composed of several panels around columns, prompting the viewer to wonder if it is a painting or a sculpture. The artist, whose work resists categorization, treats the canvas three-dimensionally, like an object. His ambition is not to create the illusion of a space, but to consider the idea of ​​function. Architecture and design play fundamental roles in his practice. Each work changes according to the point of view, creating confusion for the observer. This gives rise to various "memories" of the work despite its minimalist appearance. Even the plastic laminate used in the work refers to a whole generation of post-war Italian designers (in particular, his fascination with Ettore Sottsass) and also to the Bauhaus artists Josef and Anni Albers. 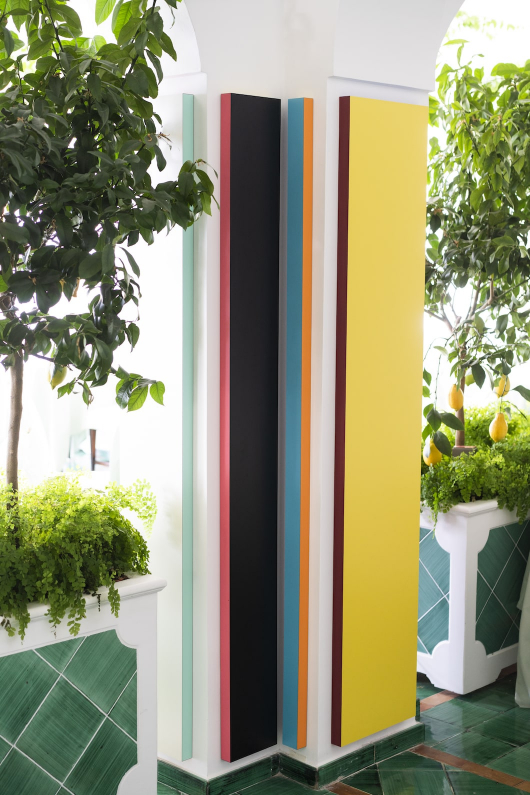 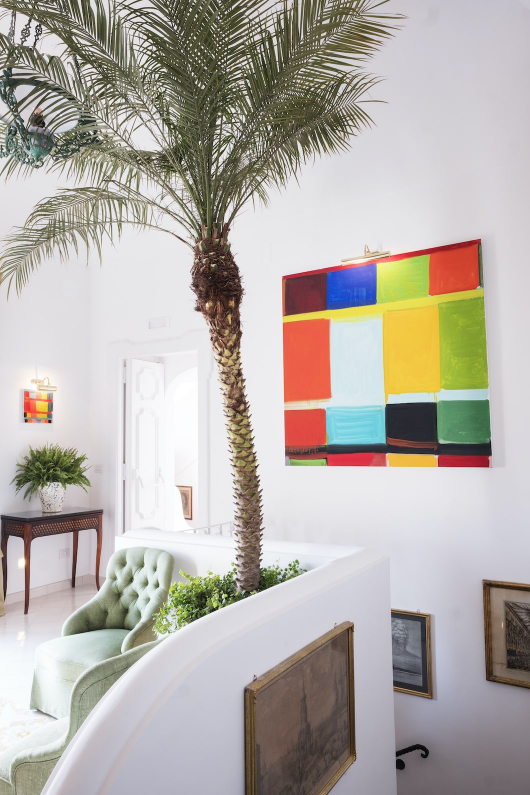 The works of Rita Ackermann, a Hungarian artist based in New York, are located on the border between abstraction and figuration, between dream and reality. Her practice is based on the use of pigments in painting, and she uses cancellations, overlaps, and smudges. Her approach to the Sirenuse project also required a process of deleting something in order to add something new. In fact, Ackerman chose for her installation a significant room in the original nucleus of the hotel, in which there were two paintings from the family collection facing each other, as if they were in dialogue. One of them was a painting of a cardinal related to the family, bought at auction by Antonio Sersale's father. For this reason, the proposal to replace the two works with two new paintings by the artist initially met with resistance but was eventually accepted. The inspiration came from a painting that the artist made in 1994, upon her arrival in New York. She returned to it, while considering classical Neapolitan and Pompeian painting.

The British artist Lucy Stein, who works between myth and reality, is also in the Sirenuse collection with a series of drawings and a ceramic work all on the theme of the mermaid, a recurring figure in her work. The next artist to be commissioned also comes from the United Kingdom: Caragh Thuring, who has recently exhibited not far from Le Sirenuse, in Naples, at the Neapolitan branch of the London based Thomas Dane Gallery English gallery Thomas Dane. 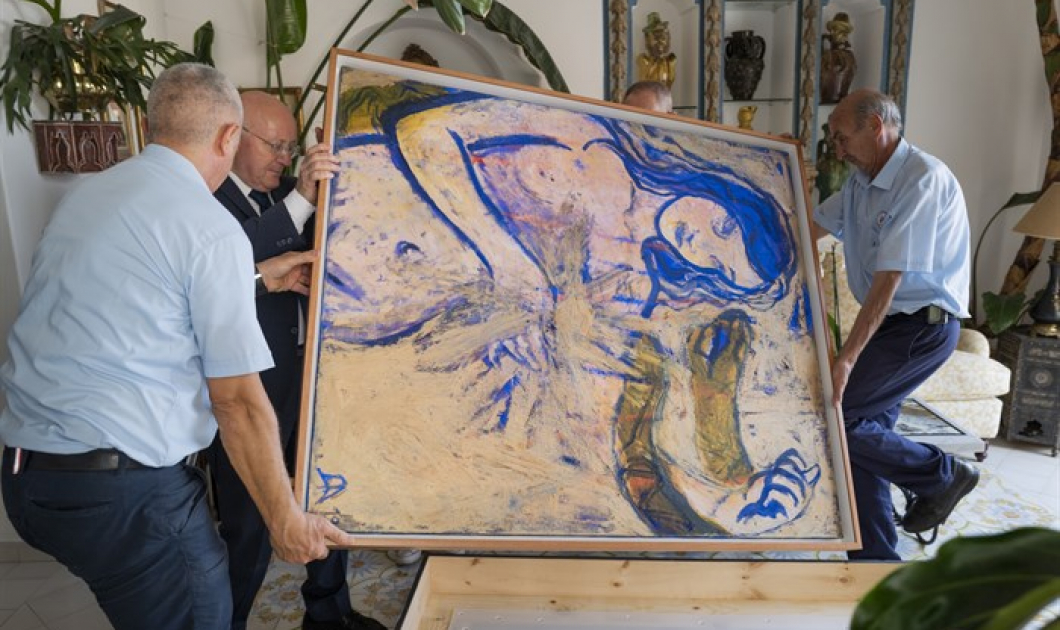 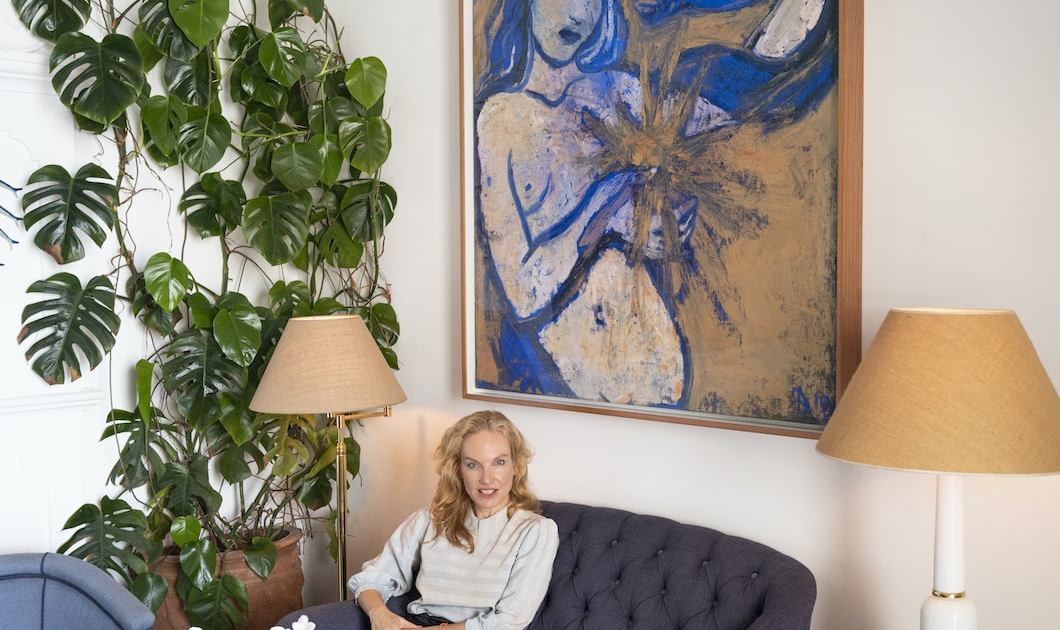